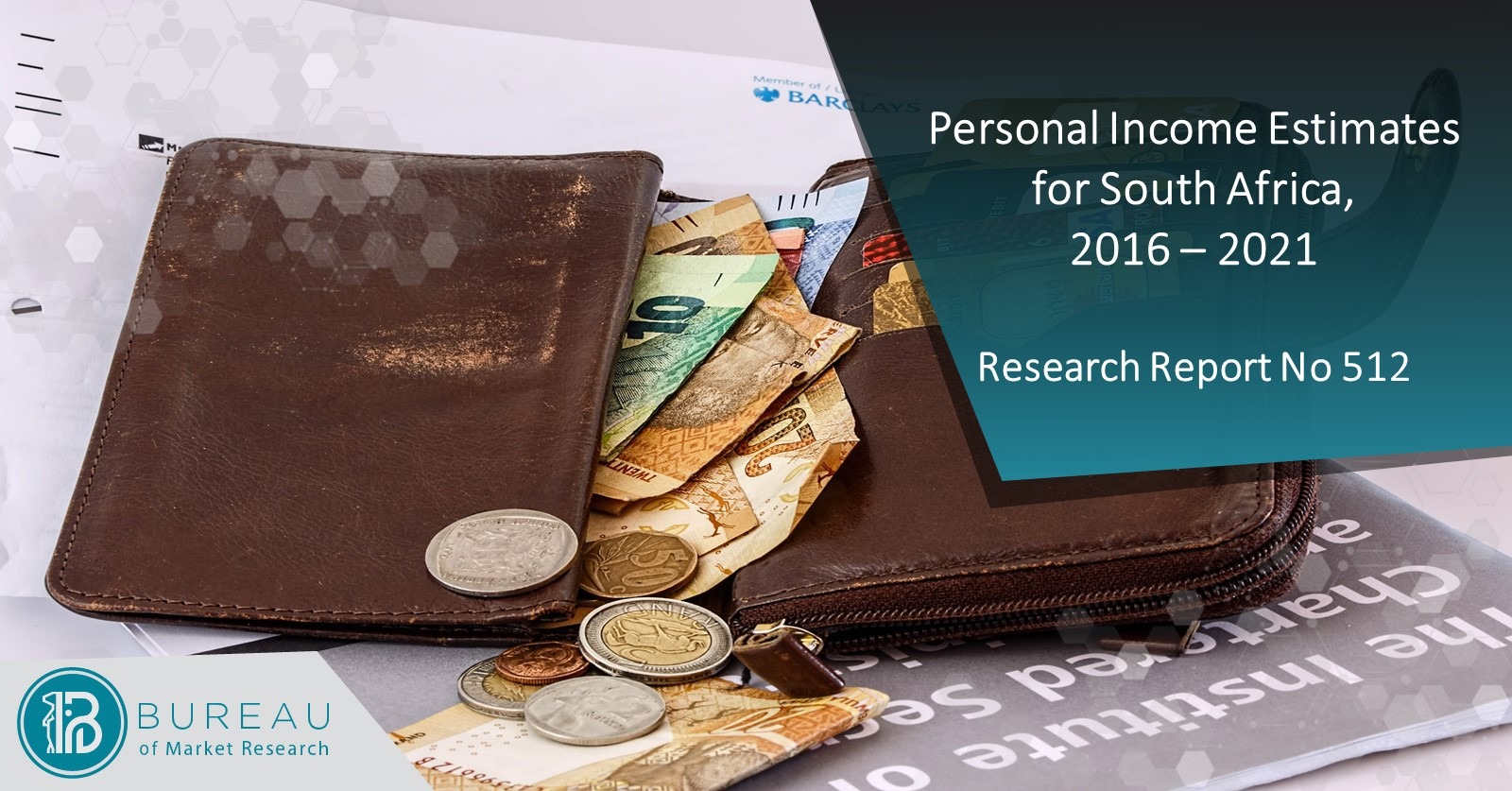 Even before the Covid-19 pandemic the South African economy was characterised by low growth, high levels of income inequality and poverty, structural unemployment and low investment. The weak economy with a growing national debt burden contributed to sovereign ratings downgrades, consequently increasing national debt service costs. Individuals and households, especially those in lower income groups, also had to turn to unsecured debt to finance living costs as the economy was already under immense pressure giving rise to little job creation.

During 2020 the situation intensified following economic closures during the Covid-19 lockdown, giving rise to negative economic growth, even higher levels of unemployment and great losses in personal income. The economy contracted by 7.0% and many individuals either lost their jobs or became discouraged to even look for jobs, resulting in an expanded unemployment rate of 42.6% at the end of the year (Statistics South Africa, 2021). During 2020 income losses did not only result due to job losses, but also due to indirect and induced economic impacts on the personal income growth of those people who did not lose their jobs, for example earning lower incomes than usual during the Covid-19 lockdown period due to not being able to work their usual full hours or receiving lower or no salary increases because of businesses not being able to afford such increases due to low or negative business income growth.

In order to investigate personal income positions of consumers given the macroeconomic challenges indicated above, the BMR income and expenditure model was updated with the latest available data to obtain the estimates provided in this report. Population and parameter weights were used to ensure the overall accuracy (validity) of the income estimates of the model. The results (figure 1) for the adult population (aged 15 years and older) indicate that following relatively high annual nominal growth rates of around 7.5% during 2016 and 2017, nominal growth rates in personal incomes slowed to around 5% during 2018 and 2019. The year 2020, however, brought about declines in income, where total income decreased by 3.4%, while cash flow income for the adult population also declined by a somewhat higher rate of 3.8%, resulting in a constrained ability of South African individuals to transact due to less funds available for expenditure and therefore negatively impacting the economy. The main difference between these income definitions is that income of a non-cash nature such as income in kind and imputed rent are included in total income but are excluded from cash flow income. 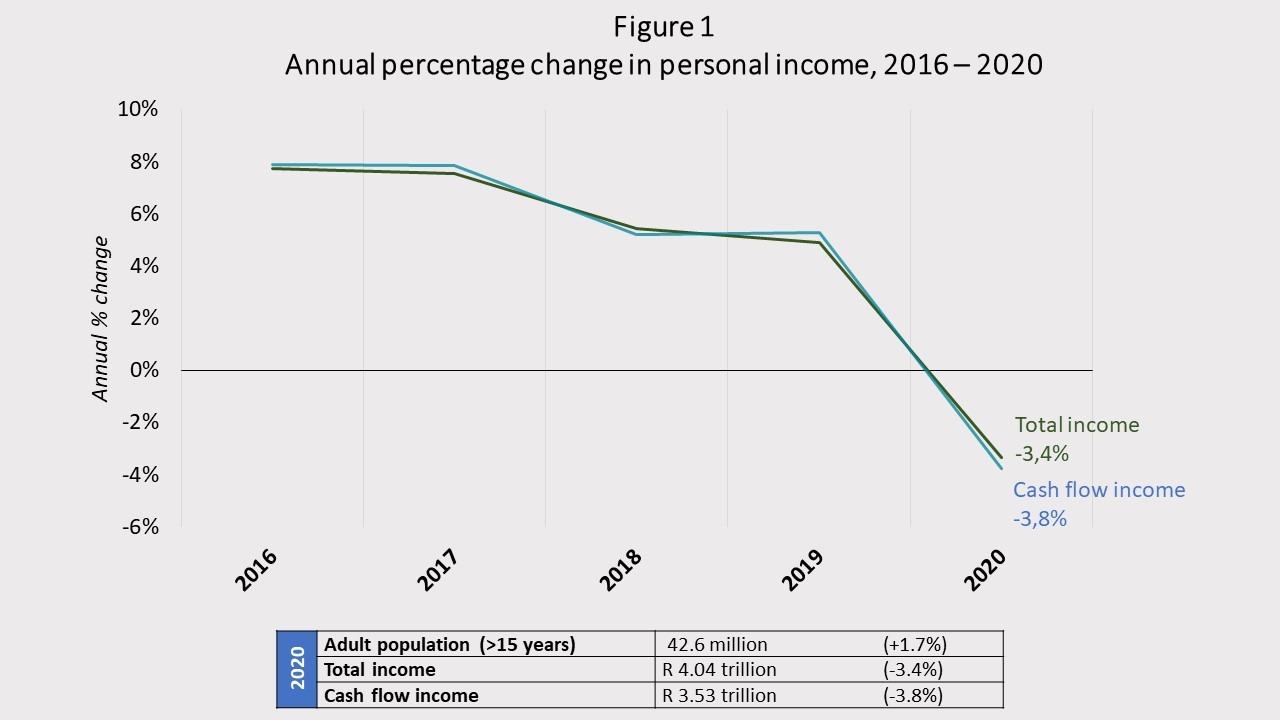 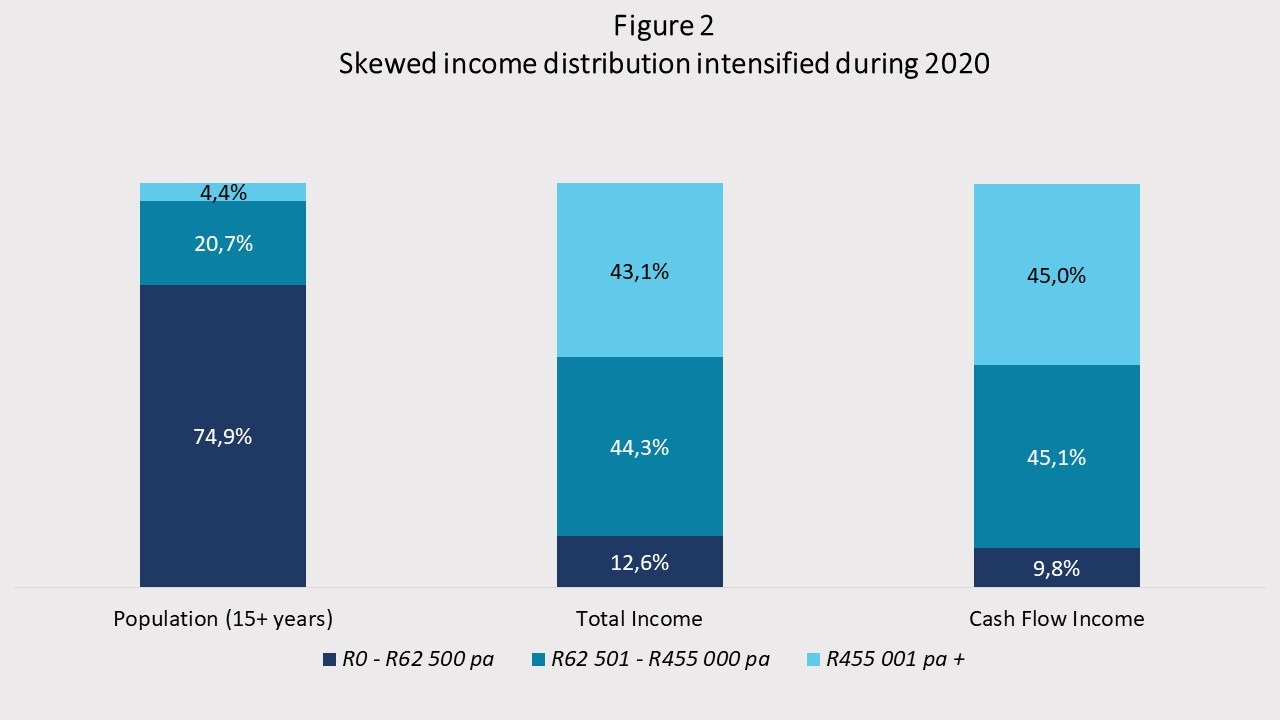 The 2021 trajectory of the South African economy is to a large extent a function of possible economic recovery after the 2020 economic impacts of Covid-related lockdowns and Eskom electricity provision constraints and a large number of remaining downside risks to economic recovery. The resulting macroeconomic situation in 2020, given this continuous contestation between recovery and downside risks, is not providing any definitive expected outcomes for 2021. In the light of such uncertainties, it is expected that there will be an improvement in personal incomes during 2021, but the magnitude of the improvement will be fairly small and it should be kept in mind that such an improvement is from a negative personal income growth base of 2020. 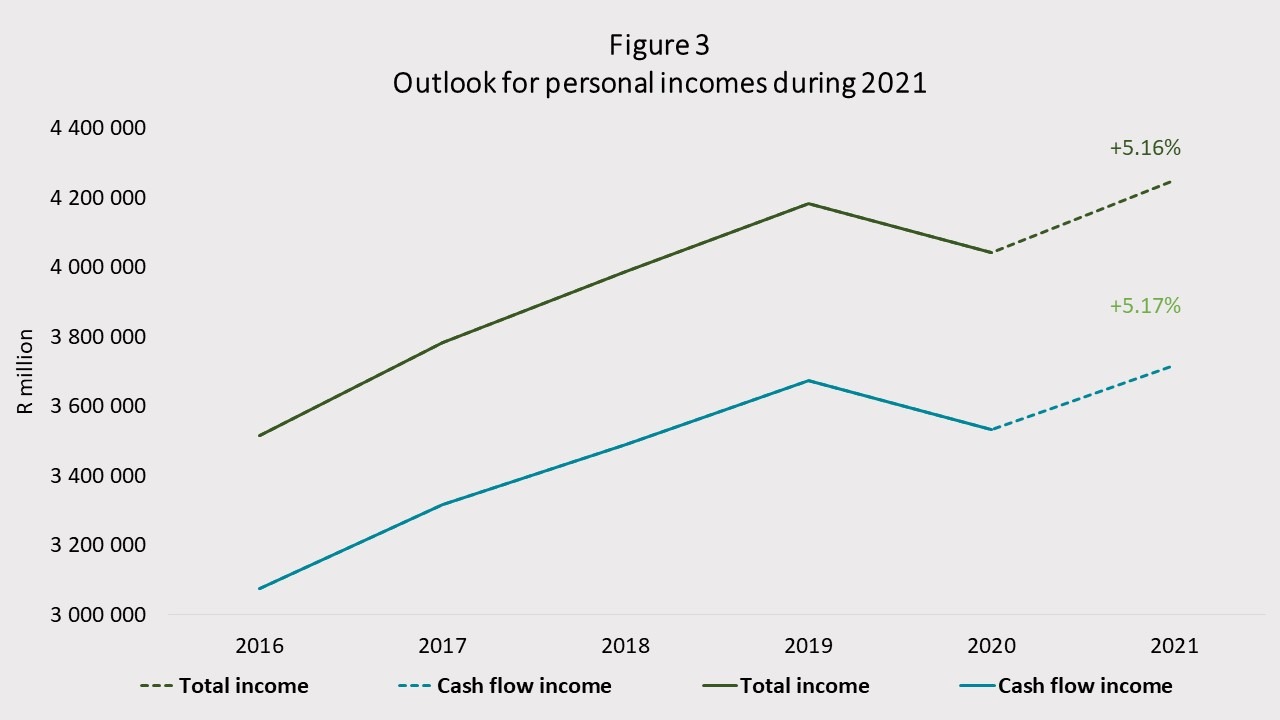 Salaries and wages remain the largest contributor to income but given the significant decrease in investment income during 2020 it can be expected that the largest increase in income from the specified main sources will be for investment income, given the low base (2020 value) from which the growth rate is measured. Given the limited increases in grants announced by the Minister of Finance in the February 2021 budget speech (National Treasury, 2021) the income of those individuals that depend on grants as their main source of income is expected to increase at 3.8% during 2021.

Major challenges await policy makers and decision makers in the public and private sectors to assist in the recovery to pre-lockdown levels and creating additional income growth opportunities. The recovery process for the economy in general will most likely be slow and is estimated that output and employment will remain well below pre-pandemic levels until at least 2023, with considerable uncertainty surrounding the future.

PERSONAL INCOME ESTIMATES FOR SOUTH AFRICA, 2016 – 2021 (Research Report No 512).  For any enquiries regarding the research study, please contact Ms J Meiring at jacolize.meiring@bmr.co.za, Prof CJ van Aardt at carel.vanaardt@bmr.co.za or Mr A Risenga at arthur.risenga@bmr.co.za who were the compilers of the report.